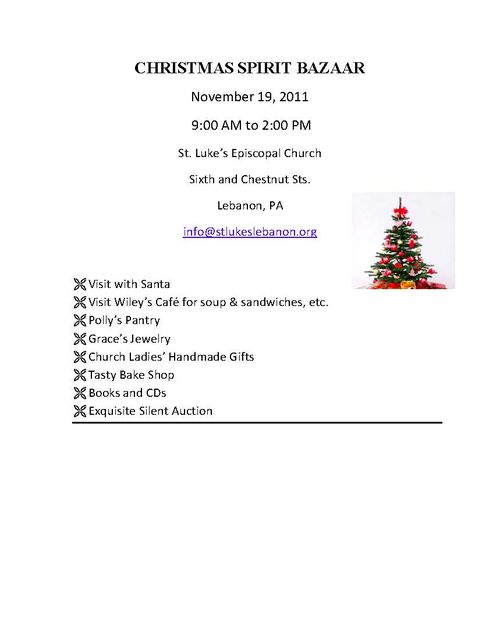 In Lebanon.A Gathering of an Unexpected Result

A Prayer Shawl Conference took place Saturday, March 19, 2011 at St. Luke's Episcopal Church, Lebanon. Approximately 50 people from 22 churches in Lebanon County came together for this Lenten, daylong activity. Those present represented the Prayer Shawl ministries from their churches ranging from established groups, to newly formed groups, and those in hopes of starting a group.

Opening the event, Father Terrence Wible, St. Luke's Rector, welcomed the group. Canon Jane Teter, widow of the former St. Luke's rector, Lloyd Edgar Teter, was the speaker. Canon for Ministries in the Episcopal Diocese of Bethlehem, Teter spoke about Contemplative Knitting and Crocheting and how its repetitive motion is soothing and opens the mind to higher thoughts. She also spoke about a possible outgrowth of each individual ministry to include countywide projects for various agencies and people in need. She showed many of her own items for this extended ministry.

Continue reading "In Lebanon.A Gathering of an Unexpected Result" »

Hello everyone! Here is the latest edition of Diocesan Life. We are now wrapping around a new, independent paper called the Episcopal Journal. Of course, our online version doesn't include that news, but you should receive it in your mailboxes this week. As always, if you have stories, photos, news, please pass them along to Kat Lehman. The file is in .pdf formate and is 2.3 MB in size.

The apartment at the rear of 519 Chestnut Street, will be used for transitional housing for folks in need in Lebanon County. This pilot project for the county received grant money from the Diocese of Bethlehem through a New Hope Campaign in which funds were solicited for a companion diocese in New Sudan, Africa, as well as the Needy in Pennsylvania.

On hand for the blessing were representatives from each of the agencies and the Lebanon Ministerium,    In its history, St. Luke's Church has given the community the Good Samaritan Hospital and Lebanon's first library.

Father Terrence Wible, rector, led the dedication. This project was developed by the Outreach Committee of the church, Todd Snovel, Chairman. People in need of housing should contact the Community Action Partnership.