On Tuesday, September 14 at 5 p.m., Trinity Episcopal Church, 234 Spring Garden Street, Easton, Pennsylvania, will open their church and their new addition to the community for an Open House and then Bishop Paul V. Marshall of the Episcopal Diocese of Bethlehem will bless and dedicate the space starting at 7 p.m.

At the ceremony, the parish will also formally announce the naming of the Trinity Primary School, which is being built in Sodogo, Sudan in the Diocese of Kajo-Keji, Episcopal Church of Southern Sudan, in part with funds raised by members of Trinity Church. Trinity tithed the proceeds of the campaign toward the building of the school, according to the Rev. Canon Andrew T. Gerns, rector. [Trinity's contribution covers about one-third of the cost of the school; the remaining two-thirds comes from other members of the Diocese of Bethlehem.]

Trinity Church serves the community not only as a house of worship and community of faith, but also as a place of help and refuge for those in need. The parish’s Ark Soup Kitchen serves 65-80 people every Saturday a nutritious, tasty meal. The parish has housed twelve-step groups, community organizations, programs from youth and the aged, and many others, and has a long history of outreach to the community. The parish, which was founded in 1819, calls itself “A Church for all people” who “discover, share and live God’s love.”

The new space contains a new commercial-grade kitchen, new restrooms and a new classroom, and makes the facility barrier-free. A stained glass window over the high altar of the church was threatened if the wall collapsed was also restored. In addition, improvements to the organ were made. The church repaved the parking lot, and made other modifications to make the space handicapped accessible.

The generosity of the congregation’s members made this building and the school in Southern Sudan possible. They raised nearly $450,000 during a capital campaign in 2009. The parish tithed their gift so that $45,000 is going across the globe, in Kajo-Keji County, Southern Sudan, a new primary school is being built in a little Sudanese village called Sodogo. The Diocese of Bethlehem, which includes Trinity, Easton, has a partner relationship with the Diocese of Kajo-Keji, which contains the village of Sodogo. The new school will be named for Trinity Church, Easton.

The new kitchen was equipped through a $25,000 grant from the Episcopal Church's United Thank Offering. The grant was one of three, the largest, awarded for projects in Pennsylvania. The UTO awarded 69 grants for 2010 for a total of $2,163,740.93 for the mission and ministry of The Episcopal Church and the Anglican Communion. The grants were awarded to projects in 43 Episcopal Church dioceses, 11 companion diocese relationships and 15 international provinces.

The Open House will start at 5 p.m. on September 14, with presentations by community and civic leaders at 6:30 p.m. Bishop Marshall will then lead the congregation and community members through the building as the new and renovated spaces are blessed, followed by a Holy Eucharist in the Church. A reception follows in Conine Hall.

The building was financed through Merchants Bank of Bangor, PA.  The general contractor was the Alfero Company of Easton, PA. The architect was Jeff Martinson, AIA also of Easton.

Posted by Kat Lehman
Tuesdays to Serve
In response to the teens at St Gabriel’s saying that they miss one another over the summer, the increased need in our community and the desire to “do the work of Jesus”, St Gabriel’s Youth Ministry has started a Summer program for youth in grades 6 through graduating seniors.  This program is called “Tuesdays to Serve”  teens are dropped off in the morning, while parents are on their way to work, they bring a brown bag lunch, and spend the day doing mission work, in prayer and in fellowship.  Some of the mission projects scheduled for the summer include working around the church campus, visiting our neighbors at the Villa at Morlaton, assisted and independent living facility, cooking the Community Meal for those in need in Birdsboro, and possibly working with the Humane Society and the Greater Berks Food Bank.  If you would like more information about the program please contact Kim Rowles, youth ministry coordinator, at youth@stgabriels.us.

Teens and Tech Seminar
Do you know what social networking is all about?  Do you know the difference between a tweet and an update?  Do you know how to keep your kids safe online?  Do you know what the dangers of the online world even are?  In hopes of opening communication between teens and their parents about their lives “online”  St Gabriel’s is hosting 5 teens and tech seminars over the summer.   Come to St Gabriel’s for a FREE seminar on Tuesday July 21, Thursday July 23, Monday August 10, Wednesday August 12, or Friday August 14 to discuss the dangers of “online life”  and how to keep safe in the cyber world.  Topics to be discussed are :  Social Networking, Cyberbullying and Cyber Predators.  Come and learn more about how teens can protect themselves on line through programs like the Teen Angel network.  For more information about the seminars contact Kim Rowles, youth ministry coordinator at youth@stgabriels.us or if you would like to learn about the Teen Angel network visit http://www.teenangels.org/.

The Living Church chose Grace Allentown as the cover of its March 22 Parish Administration Issue. Download the cover as a pdf file: Download 090322.LivingChurchCover.Grace

Posted at 09:21 AM in Parishes, Renovation, Social Ministry | Permalink | Comments (0)

It's tempting to imagine providence at work in the renovation of Grace Episcopal Church, an Allentown landmark where congregants with an evergreen passion for the Gospel had grown ever less enamored of the vinyl floor, immovable pews and faded 1960s decor.

Even the rector described the look of the place as ''basement rumpus-roomy,'' but transformation -- new floors, new seats, a coat of paint -- seemed out of reach.

The 19th century church at Fifth and Linden has only 80 members and not much money. And virtually all its resources, financial and human, are funneled into its fundamental mission of outreach to the city's dispossessed.

But a few strokes of good fortune and an outpouring of volunteerism let the people of Grace reshape the church for far less than anyone dared to hope. And that has given a renewed sense of energy and purpose to parishioners, who consider the little church an essential part of downtown's past, present and future.

''What this church means to downtown is just as important as the Baum School [of Art] across the street and the art museum on the corner,'' said member Michael Fegley, a major investor in the city's fortunes through his family's Hamilton Street restaurant, the Allentown Brew Works.

''Just as other people are doing facade restorations in the neighborhood, this is our investment in downtown.''

That's not just an insider's view.

''They're incredibly important,'' said Mayor Ed Pawlowski, who frequently champions the value of faith communities to cities. ''They do some amazing work in the community with their after-school program, their homeless initiatives, their food program.Â They're a stabilizing force in the community.''

Posted at 08:26 AM in Liturgy/Music, Newspapers, Parishes, Renovation | Permalink | Comments (0) 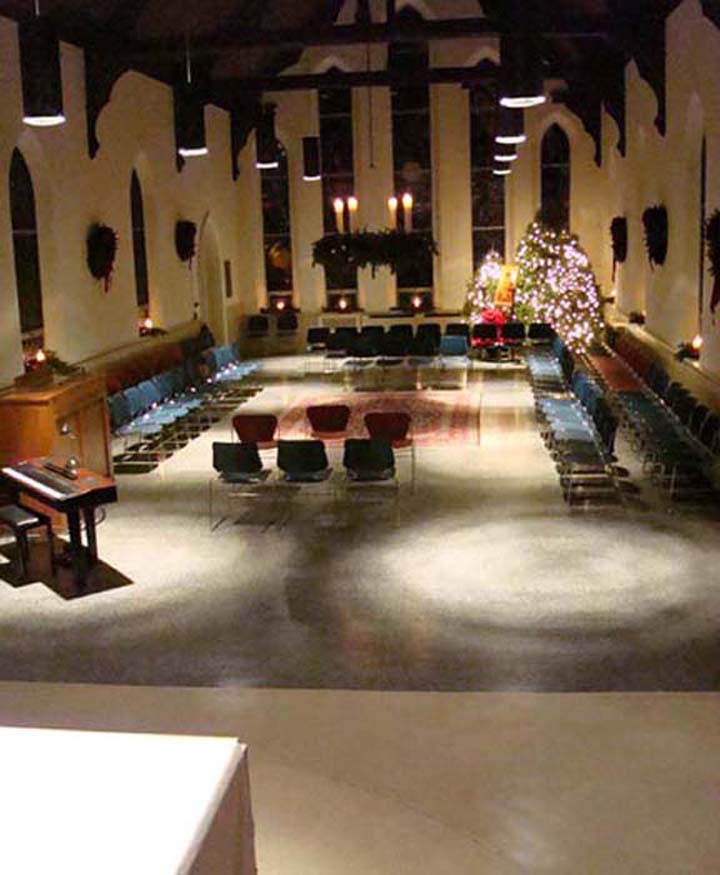