“I don’t want to have the parish buy a columbarium, Jean.” said Fr. Edward Erb, of Grace Episcopal Church in Honesdale, to one of his parishioners, “because as soon as we do, you’ll die.”  But that did not deter the parishioner.  One Friday, her husband drove her to the Church.  She was not strong enough to get out of the car.  When the priest came out to greet her, she handed him two checks to pay for the unit and its installation.  A week and a half later, she did die.  But she got her wish. 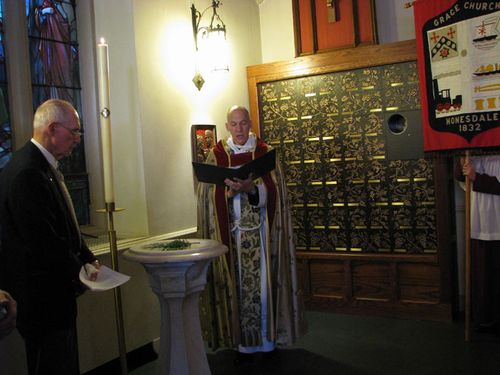 Sunday November 6th for the commemoration of All Saints, Fr. Erb, surrounded by Jean’s family dedicated the columbarium to the glory of God, and in memory of Jean Hoerter.

A columbarium is a wall of niches specially designed to give permanent rest for the cremated remains (“cremains”) of the faithful.  “It is a wonderful stewardship in many ways,” explained Fr. Erb.  “First of all, it saves precious earth from row after row of graves in a cemetery.  Secondly, cremation is less expensive than interring a body in the ground, and saves considerable on funeral costs, not having a coffin to purchase, for one thing.  In addition, having the remains of the faithful placed at rest in the Church continually reminds us of the saints who have gone before us.”

The columbarium is placed in the Baptistry at Grace Church and contains 64 niches.  The reason for the placement is that in Baptism, Christians are assured of the hope of resurrection to new life after the death of this life.  At Grace Church, as in many churches, the Baptistry is placed at a major entrance into the Church.  Again, the symbolism of “entry” - in this case entry into eternal rest with God.  Grace Church is also proud to house the family baptismal font of Philip Hone, himself, originally placed at Trinity Church, Wall Street, New York City, and for over 150 years housed in the Baptistry at Grace Church.  “Two great benefactors of the parish are memorialized together,” concluded Fr. Erb.

Grace Church will be one of the sites honored by the Houses of Worship Tour sponsored by the Greater Honesdale Partnership later this month.  The public is warmly welcome to visit the Church to learn more about its history, and its future.

[From Charlie Barebo] The Forward Life Planning Workshop, presented by Charles Cesaretti, Diana Marshall and Charlie Barebo, will be held on Saturday, May 22 at St. Luke's, Scranton. Although sponsored by the congregations in the Northern Tier, this workshop is open to all congregations in the Diocese of Bethlehem. Please note that registration and luncheon are free.  However, for planning please call Ely Valentin, 610-691-5655 x 222, or email evalentin@diobeth.org. The program has both pastoral (PB, pg. 445), as well as institutional implications, since many of our congregations have benefited through the planned gifts of former parishioners to the parish's Endowment Fund. Download the pdf file below. 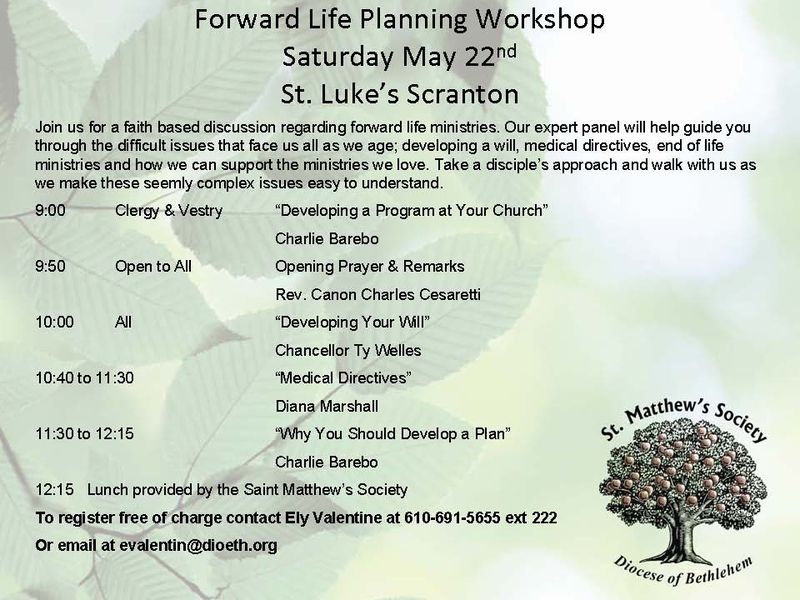 Money Isn't/Is Everything –– Workshop on Stewardship and Planned Giving

Under One Roof (the partnership of the parishes in the Northern Tier of the Diocese of Bethlehem) will offer a special workshop to explore the role that money plays in our daily lives and in our faith. The workshop is scheduled for late September (Sept. 20, from 9:30 to 2:00, at St. Paul's Montrose) in time to assist, guide, and resource parishes for their stewardship programs.

We live in a money-dominated culture. We are constantly told that the amount of money we earn determines who we are. We are promised that having more money will make us happy. Yet the relentless focus on money and accumulation of wealth can fill us with anxiety and self-doubt that rob us of the peace and contentment that Jesus promises in his Sermon on the Mount.

As Christians, we must wrestle with some of life’s most basic questions: How much money is enough? Who is master: my money or me? What do I truly rely on for security: money or God? By examining our beliefs about money, and what Jesus had to say about money and wealth, we can start to live in ways that are connected, passionate, meaningful, and -- most importantly -- free. We can learn how to help our communities of faith engage in the work of changing lives and challenging the status quo, just as our Lord did on this earth. We can participate in building the kingdom of God.

Join Dan Charney and Char Horst, Missioners for Stewardship and Development, respectively, in open and frank discussion about the meaning of money and its role in life and ministry. All are most welcome. There is no charge for this workshop. Lunch and refreshments are included. Please register by September 15 with Brenda Allen at St. Paul’s Montrose by phone 570-278-2954, or email. Please put UOR in the subject line.

Posted at 10:13 AM in Planned Giving, Stewardship, Workshop | Permalink | Comments (0)

Bishop Paul will greet members of the St. Matthew Society as they gather on St. Matthew Sunday, May 4, for a special reception to honor and celebrate their generosity to the Church. The St. Matthew Society was founded in 2001 throughout the Diocese of Bethlehem to recognize and thank all those who have planned a gift to their individual parishes. This year’s celebration event will be held at the Lehigh Country Club from 3:00 to 5:30 p.m., and will feature food, drink and good company. The Bishop sincerely hopes that all current St. Matthew Society members will plan to join him and each other at this special gathering. For information about enrolling in the St. Matthew Society, and/or to learn more about the stewardship of planned giving, please contact Char Horst, Missioner for Development, at chorst@diobeth.org or 610.683.8625.

Download below a brochure announcing a Money and Faith Retreat led by The Rev. Kirk "Chief" Kubicek to on June 15-16, 2007, at Kirkridge Conference Center for clergy and partners.

Charlene R. Horst, Esq., has accepted Bishop Paul's invitation to be the Missioner for Development for the Diocese of Bethlehem. Read more in the pdf file below.

Have you planned a gift for ministry?

This is a list of people (by parish) who have designated gifts by way of wills, trusts, life insurance policies or retirement accounts to provide resources for future ministry in their parishes. If you have planned a gift for ministry and you are not listed here, please let it be known. Send your name to blewellis@diobeth.org. If you choose to remain anonymous, your name will be held in confidence.