Dear friends throughout the Diocese of Bethlehem and beyond:

Since the 1920s, St. Stephen’s Episcopal Church has been host to an annual ecumenical Lenten series of services and organ recitals for downtown Wilkes-Barre and its surrounding communities.  The tradition will continue this year on Ash Wednesday, March 5th, with an organ recital at 11:30 am, followed by an ecumenical Lenten Service at 12:00 pm.

The theme of this year’s ecumenical services is “Finding Your Way Home.”  As in past years, the 2014 Lenten series will involve clergy, musicians, and laity from congregations throughout Wilkes-Barre and the Wyoming Valley.  A soup-and-sandwich lunch will be served each week following the Lenten Service, with a suggested donation of $4.00 per person.  Members of the participating congregations will be the hosts for these lunches.  Offerings received at this year’s services and lunches will support the Wilkes-Barre Free Medical Clinic.

This year’s organ recitalists include gifted performers from throughout the United States, from as far away as Houston, Texas, Rochester, New York, and Washington, DC.  The Ash Wednesday Organ Recital at 11:30 am will be presented by Michael Smith, Chair of Performing Arts at The Shipley School and Organist and Choirmaster at The Episcopal Church of the Good Shepherd, both in Bryn Mawr (Philadelphia), Pennsylvania.  Before assuming these posts, he served as Director of Music at The Groton School in Groton, Massachusetts, where he was awarded the Pratt Chair of Music.  Michael earned his undergraduate degree in organ performance at Samford University in Birmingham, Alabama.  While in Birmingham, Michael was assistant conductor of both the Samford A Cappella Choir and the Birmingham Boys Choir, and was choirmaster at St. Andrew's Episcopal Church.  He went on to earn graduate degrees in organ and conducting at Yale University, where he served as graduate assistant conductor to the famed Yale Glee Club.  He has accompanied and conducted choirs on tours throughout Europe, Africa, Russia, and South America.  Mr. Smith’s St. Stephen’s recital will feature works by J. S. Bach, Eugene Bozza, and William Boyce.

The Service at 12 noon will be led by The Reverend Daniel FitzSimmons, Rector of the Episcopal Church of St. Martin in the Fields, Mountaintop.  The preacher will be The Reverend William J. Marshall, Jr., Interim Priest Associate of St. Stephen’s Episcopal Pro-Cathedral, Wilkes-Barre.  Special music will be presented by The Wilkes University Chorus, directed by Dr. Steven Thomas.  Organist and music director for these services will be St. Stephen’s Organist and Choirmaster, Canon Mark Laubach.  Hosts for the lunch that follows the March 5th service will be the Women of St. Stephen’s Episcopal Pro-Cathedral.

I hope many of you can join us for at least one or more of these recitals and services!

Wishing you and yours a blessed and holy Lenten season ... 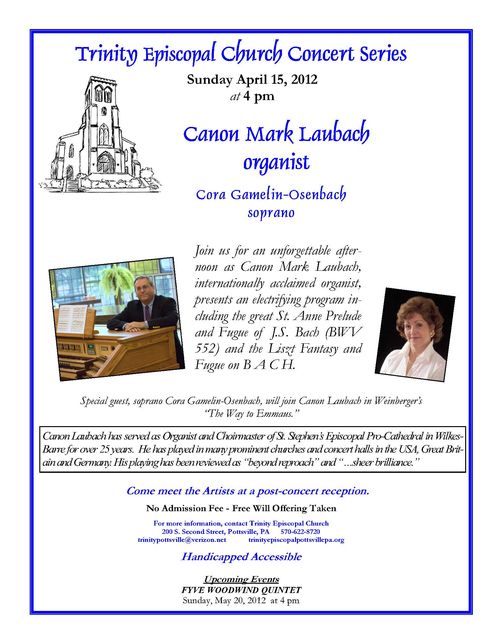 St. Stephen’s Choir will present the annual Festival Service of Lessons and Carols for Advent on Wednesday, December 14 th at 6:00 p.m., led and accompanied by Canon Mark Laubach.  Offerings will support St. Stephen’s “Voice For Life” Fund and gifts of food and clothing will be received for those in need.  A reception will follow in the Auditorium.

May 22 Evensong and Laubach Celebration

St. Stephen’s Episcopal Pro Cathedral in Wilkes-Barre will celebrate the 25th anniversary of Canon Mark Laubach’s service to the church following a choral Evensong at 5:00 pm Sunday, May 22, in the church, at 35 South Franklin Street.  Evensong is one of the most beautiful services in the Anglican tradition, and the public is invited to stay for the reception afterward.

Music at the Evensong will include Let the People Praise Thee, O God, the majestic anthem composed by William Mathias for the wedding of Prince Charles and Lady Diana Spencer in July, 1981.  The St. Stephen’s choirs under Mark Laubach’s direction also will sing the Evening Canticles in E by Herbert Murrill, and William Smith’s Preces & Responses.

Mark Laubach came to St. Stephen's as Minister of Music January 2, 1986, just two years after winning the National Young Artists Competition in organ performance.  He was appointed a Fellow in Church Music at the National Cathedral in Washington, DC, and shortly thereafter came to St. Stephens.  Canon Laubach has performed in major venues all over the world, including the Kennedy Center, St. Thomas Church and the Cathedral of St. John the Divine (both in New York), and in London at St. Paul’s Cathedral and Westminster Abbey, as well as the King’s Chapel in Cambridge.

Canon Laubach administers a busy liturgical, choral, concert, and broadcasting schedule at St. Stephen’s. In 2002, under his supervision the church’s large pipe organ was rebuilt by the Berghaus Organ Company of Chicago. This instrument now stands among the finest of its type in the Mid-Atlantic region, having won high praise from organists and audiences.
--
Suzanne Fisher Staples
www.suzannefisherstaples.com
570.945.7143
570.561.5962 (cell)

Lessons and Carols in Wilkes-Barre

Wednesday, December 15 at 6:00 p.m. at St. Stephen's Pro-Cathedral, Wilkes-Barre. This is an annual program we do to commemorate the beginning of Advent.  This year, however, will be extra special because it is our Organist/Choirmaster Mark Laubach's 25th anniversary at St. Stephen's.  Mark will perform for the first time ever a brand new commissioned piece by David Briggs, an accomplished organist from Great Britain, who performed at our last silent film showing last year.

Find below a memo from Mark with a listing of songs we will be performing. The memo als invites you to join the choir. So, if you don't plan on that, kindly disregard the info there.

There is no admission, but as usual, the Choir will collect free will contributions that will go towards our music activities. You are free to give as much or as little as you'd like. Free parking is available next to the church.

Erika Funke informs me that she will air an interview she did with Rick Hoffenberg and me (about our duo recitals) on her program, Arts Scene, tomorrow (Thursday, October 21st) at 11 AM. Set your dial (if you have a radio with such an ancient thing!) to 89.9 FM and be listening! You can also listen to the interview live online at www.wvia.org. I think it will be an informative and fascinating program in which we both discuss the pieces we’re playing and other aspects of doing organ & piano duets.

Dr. Rick Hoffenberg is a good friend and music faculty colleague of mine at Marywood University in Scranton, a phenomenal pianist, and a graduate of Princeton, Westminster Choir College, and Yale. Rick and I are collaborating on three performances of a duo piano & organ recital in the coming weeks. Dates and locations are as follows ...

All performances are free and open to the public. The recital will feature duo works by Marcel Dupre and Igor Stravinsky, and solo works by Brahms, Nikolai Kapustin, and William Bolcom. I hope you can join us for one of these!

In days gone by, when people would visit in homes, a customary form of entertainment was to gather around a piano or pump organ and sing hymns. You didn’t have to always sing perfectly in tune, and you didn’t have to listen to a sermon – you just sang and had fun doing it!In that same joyous spirit, on Saturday, September 25th from 12 noon to 5:00 p.m., St. Stephen’s Episcopal Church (35 South Franklin Street, Wilkes-Barre – right across the street from Boscov’s) will open its doors to any and all who wish to come by for a good, old-fashioned “hymn sing” – with a twist.  We’re calling it a “HYMN-A-THON”, as it will fill five full hours with singing hymns, and will raise money to support St. Stephen’s VOICE FOR LIFE Chorister Training Program for children and youth.

Fear not, you don’t have to be here for all five hours! But you’re invited to come and sing (or even just sit and listen) for as long as you’re able. If you have favorite hymns, you can request them in return for a designated contribution (pay by the verse). And for an extra contribution, you can even request a special organ piece or an improvisation based upon your chosen hymn!