Our vestry asked that I share the following  with the newSpin community:

A lively discussion during one of our recent Sunday morning worship services carried over into our fellowship hour. The Gospel reading on this particular Sunday was from Matthew 5 and recounts a portion of the Sermon on the Mount that includes the Beatitudes. Our discussion centered on the brutal murder of David Kato, an activist for homosexual rights in Uganda, and the response or lack of response by leaders of the Anglican Church in Uganda. The discussion participants drafted a letter to our Presiding Bishop Katherine Jefferts Schori, expressing our dismay and urging a strong response from our leadership in the Episcopal Church.

We were surprised and heartened to receive a letter in response from the Presiding Bishop along with a copy of the statement which was conveyed to the Anglican Communion during the Primates Meeting in Dublin this past February.

Thanks and God's peace-

[This is the text of the letter from Presiding Bishop Jefferts Schori. I have copied the text rather than attach her letter because the jpg of the letter sent to me by the parish was not easy to read. Additionally, statements by the Archbishop of Canterbury and the Presiding Bishop, as well as a variety of items regarding the death of David Kato appeared in various editions of the newSpin newsletter over the past six weeks. ––Bill]

Thank you for your letter of concern about the situation in Uganda. I, too, grieve the death of David Kato, and the dearth of pastoral concern for the mourners at his funeral. I sense some confusion about roles in your comment about this, "but also by the denial of comfort to Kato's family in their time of need by our church." The Anglican Church of Uganda had responsibility for this funeral, rather than The Episcopal Church.

The Episcopal Church has repeatedly expressed concern about draconian laws relating to homosexuality in Uganda.

The primates of the Anglican Communion, gathered in Dublin last week, also expressed our concern about the death of Mr. Kato, and reminded the Communion that as fellow Anglicans we are called to uphold the dignity of all persons. I enclose a copy of our statement. I have also spoken about this situation, both the murder of Mr. Kato, and the larger issue of criminalizing homosexual behavior –– in particular, at the end of 2009, when this law first began to be considered.

I assure you that The Episcopal Church stands against prejudice toward gay and lesbian persons, against the violence directed toward such persons, and for the availability of pastoral care to all members of Christ's body.

I give thanks for your concern and pray that your ministry may be a blessing to many. I remain

Your Servant in Christ

A national day of mourning and solidarity for the LGBT community. Come together on November 12 at 6:15 p.m. at St Mary's Church in Reading and walk down Windsor to Centre Ave and then down Centre Ave to Calvary UCC where All Souls Church is hosting a 7:00 p.m. service of remembrance. The walk is less than a mile. No banners. No music. No rainbows. No stereotypes. No shouting. As a show of unity, please wear all black clothing. See poster below. 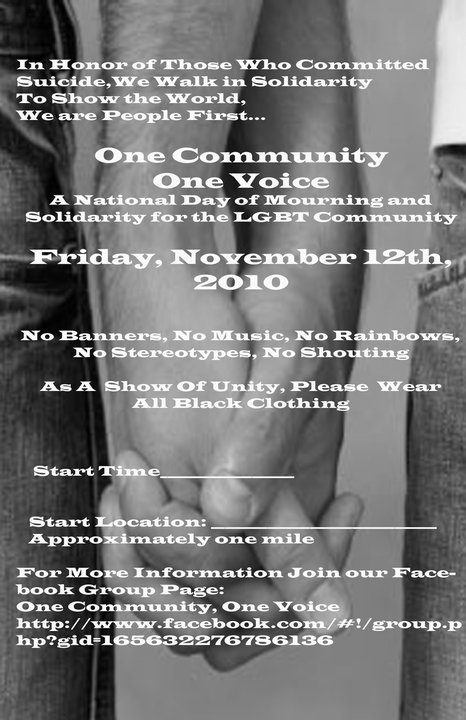 A Matter of Pride
By T. Scott Allen 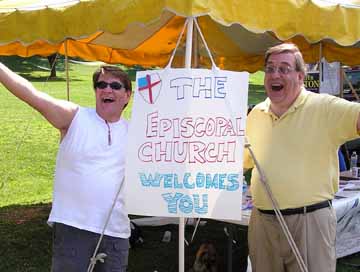 On Sunday, August 16, parishioners and clergy from six congregations plus a few retired clergy staffed an information/welcome tent on behalf of the Episcopal Church at Pride-In-The-Park, held annually at Cedar Beach Park in Allentown. The largest Gay, Lesbian, Bisexual and Transgendered (GLBT) gathering in Northeastern Pennsylvania, it drew an estimated 5500 people this year.

Handing out flyers listing many Episcopal church’s and their contact information as well as Sunday service times, the tent volunteers spoke with many GLBT people and their allies who were seeking spiritual communities or wanted to tell us how glad they were we were there. The tent was emblazoned across the front with a banner which proclaimed “The Episcopal Church Welcomes You!”

Continue reading "A Matter of Pride ... in the Park" »

The Church of the Mediator invites you and members of your congregations to join us each Thursday evening during Lent for a light dinner and discussion based around the award winning movie "For the Bible Tells me so" (about Christian families struggling with the issues of homosexuality.) Please call the church office at 610-434-0155 so we can make sure we have enough food!

In Scranton.Showing of "For the Bible Tells Me So"

[From Peter D'Angio, rector, St. Luke's Scranton] On Friday, November 21st at 7:00 p.m. Saint Luke's will host the Integrity Chapter of the Diocese of Bethlehem for a viewing of the independent documentary "For the Bible Tells Me So."

Continue reading "In Scranton.Showing of "For the Bible Tells Me So"" »

Enlarge the site of your tent,
and let the curtains of your habitations be stretched out;
do not hold back; lengthen your cords
and strengthen your stakes.  Isaiah 54.2 (NRSV)

On a beautiful August afternoon the Episcopal churches of the Lehigh Valley joined together to have a ministry of presence and hospitality at the Lehigh Valley Pride-In-the-Park festival at Cedar Beach Park in Allentown.

The “Episcopal Tent” was graciously loaned by Mr. Mickey Brown of St. Andrew’s Allentown and owner of Michael Thomas Floral Designs. Father Patrick Malloy of Grace Church, Allentown, coordinated the volunteers and contents of the tent. All 500 red bag clips, emblazoned with the Episcopal shield and the phrase God made YOU for a purpose, the Episcopal Church welcomes YOU were handed out. Official attendance was set at over 5,000.

Diocesan Presence at Pride in the Park

[By Patrick Malloy, rector, Grace Allentown]
Yesterday, about 40 members of the Diocese from six parishes (Grace, Allentown; Mediator, Allentown; St Andrew’s, Allentown; St. Anne’s, Trexlertown; Trinity, Bethlehem; and Trinity, Easton) hosted our booth at the Lehigh Valley Gay Pride event. It was a remarkable show of solidarity. Of the 40, only four or five were themselves gay. That sent a clear message that the Episcopal Church, not the gay members of the Episcopal Church, welcomes everyone into our community. Other parishes that contributed to the two-page ad in the Pride in the Park booklet and to the cost of the tent and materials were the Cathedral, Bethlehem; Christ Church, Stroudsburg; St. Margaret’s, Emmaus; and Trinity, Mt. Pocono; as well as the Safe Spaces Committee of the Diocese.

Continue reading "Diocesan Presence at Pride in the Park" »

For the Bible Tells Me So

This documentary film will be shown at Christ Episcopal Church, Reading (435 Court Street) on Sunday, May 18, at 4:00 p.m. The event will be hosted by GLEF. All are welcome. For more information, see the GLEF website or email Dewayne Messenger.

In this film, through the experiences of five very normal, very Christian, very American families -- including those of former House Majority Leader Richard Gephardt and Episcopal Bishop Gene Robinson -- we discover how insightful people of faith handle the realization of having a gay child. Informed by such respected voices as Bishop Desmond Tutu, Harvard's Peter Gomes, Orthodox Rabbi Steve Greenberg and Reverend Jimmy Creech, For the Bible Tells Me So offers healing, clarity and understanding to anyone caught in the crosshairs of scripture and sexual identity.

Grace Church, Allentown, will host a "Gay Men's Reading Group" off-site on four Wednesday in January, beginning January 9. Dinner with open conversation about the experience of growing up and living as a gay man in a predominantly straight society. The venue will be chosen in light of the size of the group. The featured book will be The Velvet Rage Overcoming the Pain of Growing Up Gay in a Straight Man's World by gay psychologist Alan Downs. To join or for more information: Father Patrick Malloy, rector, Grace Church, Allentown: email or 610-435-0782.