As most readers will know, Bethlehem churches take turns each night serving and housing homeless men and women in the “Room at the Inn” project. On Thursday nights, Jo Trepagnier is one of those serving men at Nativity Cathedral. On December 13, what she brought for the men was not something she had made; rather it was from the Church of the Mediator, where she serves as office manager, and it was made by a handful of Raub Middle School students who attend Mediator’s after school Just For Kids program.

A favorite activity in this program is cooking in the Mediator kitchen. Usually they eat what they make. But that Thursday, volunteer Patricia Gaukler suggested the idea to the kids that they cook for the shelter . “The kids were enthusiastic about it. I told them a little about the program and let them choose what they wanted to make,” she said. They chose salad because they wanted to give the men something healthy and cupcakes “because they love to ice cakes,” Patricia said.

Next week, I interviewed two of these cooks. Sixth-grader Caridad Reyes, who likes the cooking because she wants to train to be a chef someday said, “We made food for him because it isn’t right that everyone in the world has something, and they have nothing. If homeless people don’t eat, then we should not eat either.” She looked a little sad and cast her eyes down when she said this to me. Pat had told me that she spoke to the kids carefully about the problem of homelessness and why we should care for our neighbors. It was clear that Caridad took this to heart.

A genuine story teller, the voluble sixth-grader Steven Cruz said he knows about people in need, referring to people he sees in his neighborhood. “I cook for people all the time at home,” he said. “I give poor people pancakes, sometimes pizza.” He told me that when he was a little child he almost died from a heart condition, and that was why he cares about other people “who have problems.” Like Caridad, he loves to cook, especially rice and beans; and he shared a secret with me on how to get the dish just right.

Last year, Mediator pastor, Maria Tjeltveit, helped a group of JFK young people make pies to take to the Homeless Supportive Services Christmas party in Allentown. So this is becoming sort of a tradition.

Jo told me that the food the kids made for Nativity was a big part of the meal and a big hit with the 50 or so men. I am guessing that she asked me to write this article not just to remind people of the Bethlehem homelessness project and the work done by Just for Kids, but because it is a beautiful expression of the Gospel, children—who themselves don’t have a lot--giving what they can to people with much less. They gave of their talents, time, and heart, and showed an understanding of how giving at Christmas time can truly carry the right spirit.

[Nanette Smith is a parishioner at the Church of the Mediator, Allentown]

Posted at 11:42 AM in Bethlehem churches, Christmas, Homeless | Permalink | Comments (0)

For the fourth straight year, Bethlehem area places of worship including a couple Episcopal churches (Cathedral Church of the Nativity and St. Andrew's) are sheltering the area homeless at night. This winter season, the mission started in the beginning of December and runs until the end of March.This week we have seen a large increase of new guests. Last night we housed 34 people! If previous years were any indication, as the winter progresses, these numbers will continue to grow. Through the New Hope campaign funding, we have been able to hire 2 part time coordinators to help coordinate each site. However, many of these sites could use additional help.

Each site, at a minimum, require the following for each night they house the homeless:
Cooks and or servers- Each site will feed dinner to about 15-30 people (this includes volunteers). Usually a site will have at least two people cook and serve. Also, each site/volunteers will supply the dinner, drinks, dessert, and paper products for each meal.
Overnight volunteers- 2-3 volunteers at each site spend the night at the place of worship  to oversee everything. Additional cooks/ servers- Each site serves breakfast. Some just serve cold cereal, while others provide a hot breakfast. Again this usually takes about two people.

I encourage you to help at least once during this season. This is a transformational mission that has affected me more than you can imagine. It will do the same for you. Please take this opportunity to help the homeless. Please discern this email while you are eating a hearty soup or snuggled up in your warm bed and imagine not having it. At the very least, as a Christian, isn't this what we are called to do? Help the people that can't help themselves.

If you would like to volunteer, I've attached a flyer with schedule and contact information. Also the following link will allow you to sign-up to drive the homeless:

If you have any additional questions about the mission, please feel free to call me at 484-892-1589.

This winter's ecumenical emergency homeless shelter effort in Bethlehem will start tonight and will run until April 1.  About half of the churches who are shelter sites are outside of walking distance for the homeless to get to, so volunteers are needed to help transport the homeless guests to (in the evening) and from (in the morning) the shelter sites.  This need has created over 500 volunteer opportunities to drive over the 17 weeks the shelters are open.  The following website link has been built to help organize the driving volunteers and to explain the volunteer opportunity in more detail.

"Signs: The Gospel of John" performed at Cathedral Church of the Nativity April 16th 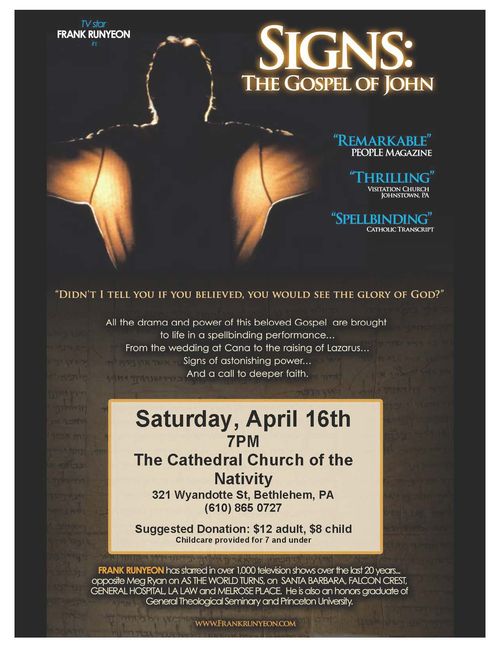 Posted at 09:43 AM in Bethlehem churches, Cathedral Church of the Nativity, Event, Local Events | Permalink | Comments (0)

Three center city Bethlehem churches have joined together to commission a new hymn.  Moravian Seminary, Trinity Episcopal Church, Salem Lutheran Church, and Central Moravian Church have asked noted hymn writer Brian Wren to pen a new hymn to reflect the joy of their union. The new work will debut March 11 at Moravian’s College’s Foy Concert. Brian Wren will be in Bethlehem to present the Weber Memorial Lecture. (See below)

Bethlehem is the focus of an historic event as the Episcopal Church, the Evangelical Lutheran Church in America (the largest U.S. Lutheran church) and the Moravian Church in North America celebrate full communion agreements that allow the three bodies to share clergy and minister together in significant ways.

The Rev. Dr. Steve Simmons, director of Moravian’s Continuing Education program, writes, “A good new hymn may surprise and delight us with its theology, poetry and music. Sung often, it can lull us into inattention, or surprise us with sudden relevance. With this in mind, Brian Wren, one of the most significant and popular hymn writers of our time, will introduce some of his own recent work, as well as new hymns by Richard Leach and Shirley Murray, and invite us to converse about them and sing them. In the process, he will discuss the history, practice, and future of congregational singing in a time of rapidly changing styles of worship.”

Dr. Wren says, "Perhaps one or two will catch our imagination and become familiar enough to express our deepest needs and beliefs, yet still be able to surprise."

Dr. Brian Wren studied at Oxford, taking degrees in Modern Languages and Theology, including a D. Phil for work on the Hebrew prophets. After ordination, he pastored a Congregational church in Essex, served as consultant to the British Council of Churches, and worked in the student-based world poverty campaign, Third World First. Since 1983, Brian has followed a freelance ministry, helping worshippers, ministers, educators and musicians to improve skills, and deepen spirituality. Recently retired as John and Miriam Conant Professor of Worship at Columbia Theological Seminary, he currently lives in upstate New York with his wife Susan Heafield, a United Methodist pastor.