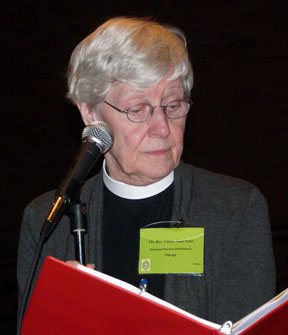 The Rev. Canon Jane B. Teter died on January 17 after a long struggle with cancer.

At the time of her death, she was serving on the bishop's staff as chaplain to retired clergy and their spouses. During her career, Canon Teter served in many parishes in the diocese and was the founding vicar of St. Brigid's, Nazareth.

She was ordained in 1983, just a few years after the Episcopal Church approved the ordination of women to the priesthood. As a layperson she was an active leader in Cursillo and a member of Trinity Church, Bethlehem.

On Wednesday, the Rev. Dr. Hillary D. Raining said, "She was a mentor and a friend to me. One of the greatest honors of my life was interviewing several first generation women priests in DioBeth including Jane to capture their pioneering stories. Jane taught me so much in that interview and this has prompted me to take the transcripts off the shelf today. In her own words, she told me to always, 'claim the good that you are doing so that others will feel empowered to do the things they might not know they can do. That will be how God works through you.' Thank you, Jane. May she rest in peace and rise in glory."

In announcing the news on Facebook, Archdeacon Rick Cluett said, "Jane's dying and death were consistent with her life; powered by her faith, strength, and determination, and her deep love and care for her family. Her life and ministry touched so many in our diocese as both layperson and priest ... Well, done, Jane, very well done. May she now rest in peace and rise in glory."

Canon Teter is survived by her children Deb, Laurie, and Ned and their families. Her funeral will be Saturday, January 28 at 11 a.m. at the Cathedral Church of the Nativity in Bethlehem. Friends may call from 10-11 a.m.

[Bill Lewellis] Beyond being a longtime colleague, Jane was a faithful friend whom I loved and with whom I loved to banter. One of my fond remembrances resulted in four words that captured the meaning of Eucharist: Today, we remember tomorrow.

On September 13, during the late '90s, before celebrating Eucharist at Diocesan House, Jane offered an explanation. We would use the readings and prayers of the next day, the Feast of the Holy Cross. She got caught up in a circular explanation. She escaped with, “So, today we remember tomorrow.”

OBITUARY – Jane B. Teter, born in Schenectady, New York, was the daughter of Thomas and Esther (Klapper) Ballantyne. She was the wife of the late Rev. Lloyd Edgar Teter, Jr. who she married in 1956. Jane attended William Smith College in Geneva, New York and later Earned a Master of Divinity degree from Moravian Theological Seminary in Bethlehem.

In 1983, Jane was one of the first women ordained in the Episcopal Diocese of Bethlehem and served as a trailblazer and mentor for those women who followed. Jane began her ordained ministry as deacon at St. Margaret's Episcopal Church, Emmaus, where she later served as Interim Rector. Jane was active throughout the diocese and at several parishes including Trinity Episcopal Church in Bethlehem and later at St. Brigid's Episcopal Church, Nazareth, where she was the founding vicar. For the last 20+ years, Jane served on the Staff of the Bishop of the Diocese of Bethlehem in a variety of roles, most recently as the Bishop's Assistant for Retired Priests and Spouses, a position she held until her death.

Jane was an accomplished knitter and an avid fan of the Philadelphia Phillies and Lehigh Valley Iron Pigs. Although Jane resided in Bethlehem for nearly 50 years, Lake Champlain and the Adirondack Mountains always held a special place in her heart.

Online condolences may be recorded at pearsonfh.com.