Jane Ballantyne Teter – A Celebration of her Life and Ministry 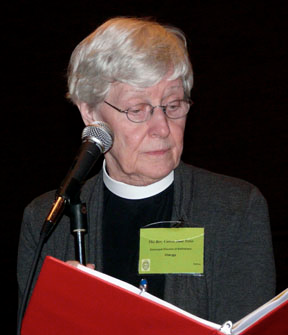 This has been very hard – trying to capture the faith and the life – the essence of a beloved friend and sister I have known for 40 years. But here is where I have come to this morning.

Because of her firm and uncluttered faith in the God who created her and loved her, Jane Ballantyne Teter was one audacious and tenacious woman. Just ask her kids. Just ask me.

I first met Jane in the late 1970’s when she was beginning to discern that she was be called by God to the priesthood. That was an audacious act, in and of itself – to think that she could and would be called by God to be a priest, this young-ish widow of a priest and the mother of three kids. What an audacious idea back in those days when the ordination of women was recently authorized and certainly not the norm and not accepted by many,

But once that call was affirmed in her heart and soul, she was tenacious in pursuit of it. Willing to endure institutional hurdles, the skepticism of others, managing family life, work life, and seminary studies, to be the person God created her to be, working as hard as she had ever worked. It took a lot, it cost a lot and by God she got there. Thanks be to God. 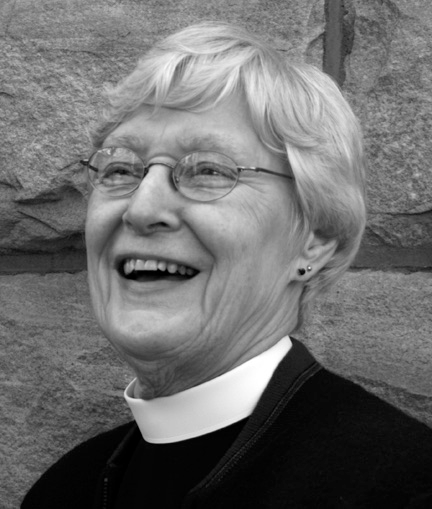 You all might not think of Jane as audacious and tenacious, but in her own quiet way she was indeed. How else could she have lived with the untimely death of her husband Edgar, raised and educated three wonderful and diverse kids, worked full-time, and made her way in the world and the church with such Grace and commitment. Audacity and Tenacity.

She built a life with her family at the center, certainly her kids, Deb, Ned, and Laurie, and then their families, and always caring for her beloved twin brother Robert and his family across the country, and her grandparents and aunts and others I do not know about.

She was the keeper and sometimes the Sheriff of family traditions. Thanksgiving, Christmas, and Easter and the annual summer weeks spent at the camp on the lake in the Adirondacks. These were pretty much nonnegotiable for Jane and so for her family, and she would sacrifice and go to some lengths to see that they happened and were opportunities for celebration in her family.

We all knew about her mystery novels, 1000 piece jigsaw puzzles, and her love for her dogs – even though she carped about them from time to time – and her knitting, always knitting. Sweaters for family, blankets for babies, and wool caps, scarves, and mitten for seafarers, and more. That one she spread throughout the diocese.

Indeed as her health began to fail, it was her Deb and Laurie and Ned who became the keeper of the traditions, who saw that these family events and times always happened. I know, perhaps better than they do, how much she loved them and how proud she was of them.

When I was rector of St. Margaret’s Church in Emmaus, it was my pleasure and privilege (and a bit my conniving, too, as chair of the Commission on Ministry) to have Jane come to St. Margaret’s as a seminarian intern, then stay on as assisting deacon and priest. She was ordained priest in the church named for Queen Margaret of Scotland, the patron of the Church in Scotland. How fitting was that for a woman in the family and clan of Ballantyne? 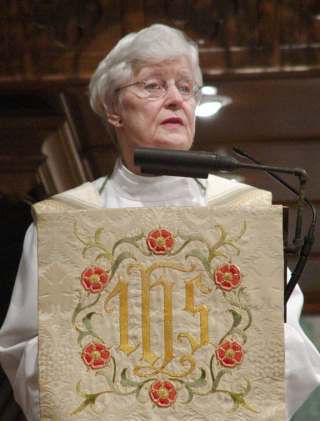 As a priest in a time when the ordination of women was still a new idea for some, viewed with skepticism by others, and denied altogether by some others, Jane’s audacious faith and tenacity took her into many, many parishes of this diocese to give people the chance to experience and come to know a woman in holy orders. By celebrating and preaching as a visitor on Sundays, by being willing to be interviewed by search committees whether or not she was interested in a move to a parish, serving as a consultant to parish leadership, she demonstrated the fullness of the ordained ministry to those who had never experienced it or even knew it was possible.

She exercised a special ministry as mentor, model, and wise woman for many women, especially, as they came into the ordained ministry of the church

Her ministry as priest, pastor, spiritual guide, mentor and friend was a gift to so many and she is loved to this day for it. Just look at the comments on the diocesan Facebook page testifying to her gifts, life, and ministry.

Serving in parishes as assisting priest, interim rector, vicar and eventually, as Edgar her husband had before her, serving as a canon to the bishop, she touched and enhanced the lives of so many of us.

Small parishes were a special love and concern for Jane and she advocated for their care and wellbeing in the councils of the diocese and beyond in the councils and General Convention of the Episcopal Church.

Even as her health declined, she took on a ministry of care for the retired clergy and widowed spouses of our diocese with prayer, greeting cards, phone calls, birthday remembrances and advocacy, never forgetting anybody.

You may have noticed that the scriptures today are not meant for Jane. They are meant for us, for those who have loved her and will always miss her –and may need the reminder, the reassurance that she has entered into the bright light of God’s love, into eternity, into the blessed company of the saints. She knew all these things deep I her heart and soul, and when it came time to contemplate passing from this life into eternity, she just set her face to it and went about it.

That is a gift to her family, and that is her gift to the rest of us. There is no need to live - or die - in fear. We are in the love and care of God all the day long, even and especially “when the shadows lengthen and the evening comes, and the busy world is hushed, and the fever of life is over, and our work is done” – even as we are passing from this life to the next.

I want to leave the last word to Hillary Raining, another priest ordained from Trinity Church, Bethlehem. Hillary posted this on our Facebook page: “Jane was a mentor and a friend to me. One of the greatest honors of my life was interviewing several first generation women priests in DioBeth, including Jane, to capture their pioneering stories. Jane taught me so much in that interview and this has prompted me to take the transcripts off the shelf today to read them. In her own words, Jane told me to always, “claim the good that you are doing so that others will feel empowered to do the things they might not know they can do. That will be how God works through you.”

Yes, indeed. Yes, indeed. And this is how God worked through Jane. And now, dear friend, may you rest in peace and rise in glory. Amen.