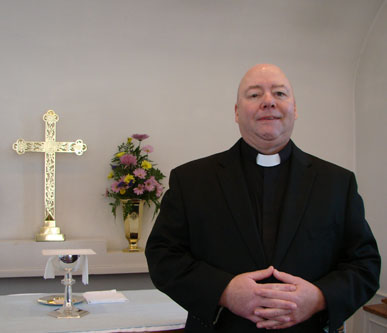 The Rev. Charlie Warwick has been appointed Deacon-In-Charge of St. Mark’s, Church, New Milford by the Rt. Rev. Paul Marshall, Bishop of the Diocese of Bethlehem.  Rev. Charlie, as he is affectionately known, conducted his first service at the parish on Sunday, November 13.  On Sunday, November 20, the congregation held a “Meet and Greet” reception in the Parish Hall immediately following the regular 11:00 AM Worship Service.

St. Mark’s was established in 1816 by early pioneers who brought their beliefs and worship with them to the New Milford area.  In October 1817 a charter by the Governor of Pennsylvania incorporated St. Mark’s. In 1822 the parish of St. Mark’s was admitted into union with the Episcopal Diocese of Pennsylvania.

A church building was raised and consecrated in 1829 by Bishop William White.  Bishop White (1748-1836) was the first Presiding Bishop of the Episcopal Church, the first Bishop of the Diocese of Pennsylvania, and the second United States Senate Chaplain.

“For the last 195 years, St. Mark’s has been a part of the New Milford community.  We continue with the same faith and worship as our founders in 1816 and continue to serve the people of the area,” stated Keklak, Senior Warden of the Parish. “We are very pleased that Rev. Charlie will become our pastor.  We are well aware of his many gifts and talents from the time he was with us as a seminarian in the summer of 2008.”

Rev. Charlie was born in Hazleton, attending Hazleton Sr. High School and received his BA degree from King’s College, Wilkes-Barre.  He is a graduate of the PA State Police Academy and the Baltimore Police Academy, serving with several law enforcement agencies.  His specialty is in the area of Police K-9.

Rev. Warwick is a licensed US Coast Guard Merchant Marine Captain and worked for 10 years in the Wildwood/Cape May, New Jersey area.  Currently, he works for the PA Department of Transportation (Penn Dot).

He is a 32nd degree Mason, a Knights Templar, Shriner, Elk, Lion, and Assistant Fire Chief.

Rev. Warwick and his wife Patty have been married for 26 years, and have one daughter.

We understand, but he really, really wanted us to use "Charlie" instead of Charles.

I hear and rejoice in the affection conveyed
by the nickname "Rev. Charlie". But to this
old English major, seeing "Rev." not preceded by the article (The) is like chalk scratching on a blackboard. And by the way
"Rev. Warwick" is incorrect. It should be
either "The Rev. Mr. Warwick" or "The Rev.
Charles Warwick."