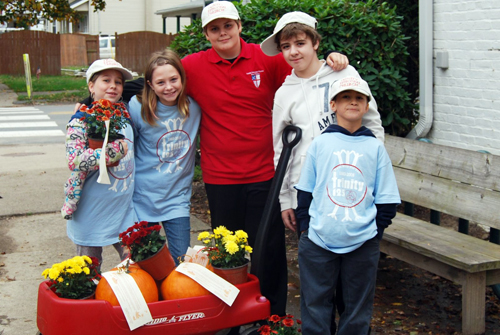 As our neighbors work to recover from the devastating September floods, Trinity West Pittston has continued to look for ways to help meet their most immediate material needs and to remind them that they are not alone in their struggles.

Projects are underway to distribute the gift cards that were donated at the recent Diocesan Convention and that are continuing to come in from collections held in individual parishes throughout the diocese. Our sincere thanks to those who have already contributed cards for our neighbors, and to those who are continuing to collect cards and forward them to us for distribution. These cards are much needed and appreciated, and will go a long way towards easing the financial burden our neighbors face as a result of the flood.

We are also planning weekend-long distribution of the donated furniture procured by Father Daniel Gunn to be held November 18, 19 & 20. Help will be recruited from schools and community organizations to assist with moving the furniture from the donor site in Wilkes-Barre to West Pittston and to help at the distribution, and we'd love to have some of our fellow Episcopal churches join in to show the community the Episcopal Church as a whole is here for them. Please email janineungvarsky@msn.com if you or your church is interested in helping.

In addition to these projects to help meet the material needs of those affected by the flooding, Trinity's Disaster Response Team also wanted to brighten spirits, encourage hope and let our neighbors know we are praying for them. On Saturday, October 23, a group of our Sunday School students along with their parents and other parishioners visited almost 100 homes in some of the most devastated neighborhoods to talk with the residents and give them a pumpkin or potted mum to bring them a little bit of fall color and cheer.

Those who took part will not soon forget the reactions of those they spoke to that day, from the kids excited to have a pumpkin to carve even though their home doesn't have inside walls to the man who asked us to give the mum to his pregnant wife to cheer her up as they faced the seventh of many Saturdays working to restore their flooded home.

We spoke to a woman who said she had been thinking about getting our her fall door wreath but couldn't quite muster up the mood...and whose home later displayed not only the wreath but a little scarecrow and one of our hand-delivered mums as well. And then there was the father who got choked up as he told us his little girl had been asking him for days to get her a pumpkin, but his long hours of work first at his job and then on their home kept him from fulfilling her request. "She's gonna be so happy tonight," he said, and even the kids in Trinity's group could see how happy that made him. Our Sunday School parents report that days later, the kids are still talking about the people they visited and the things they saw and heard.

This was a very low-cost project: the pumpkins were purchased at a discount and the mums were graciously donated by a local grower. But these small tokens made a big impact on our neighbors, and, because each mum and pumpkin carried a tag that explained the project and told our neighbors that we are all praying for them, they served as a reminder that there is a source of hope in even the darkest days.

Trinity West Pittston plans other projects like this to help our neighbors remember that they are not alone and that they will get through this. It is our hope that through little reminders of our caring and by sharing the gift cards so generously provided by our sisters and brothers throughout the diocese as well as other donated items like the furniture, our neighbors will be strengthened and sustained through this difficult time.

Thank you for your continued support of our neighbors, and please keep them and our efforts to help them in your prayers.

Shown above are some members of Trinity West Pittston's Sunday School classes who recently took part in an outreach project for victims of the September flooding.