Bishop Paul has designated the Diocesan Convention offering to go toward flood relief. Christ Church, Towanda sustained six to eight feet of flooding in their parish basement and Trinity, West Pittston was spared by one block from being overwhelmed with water. Sayre and Athens were also hard hit from the flooding. As we know more, we will be updating you. Many churches are already helping and as we gather information on the best way to proceed with donations, we will let you know what is needed and where to take it. Right now, funds are the best method of helping so that gift cards can be purchased for food and household goods. You can send funds payable to The Episcopal Diocese of Bethlehem, memo line: FLOOD RELIEF, 333 Wyandotte St., Bethlehem, PA 18015 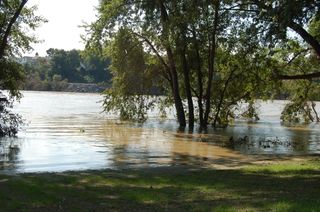 On September 7 and 8, 2011, a number of communities along the Susquehanna River in Luzerne County were hit with the worst flooding these areas have ever seen. While the levee system thankfully protected larger cities like Wilkes-Barre and Kingston, West Pittston and other nearby small towns including Duryea, Exeter Township and Plains suffered significant damage.  As of the most recent figures available from the Emergency Management Agency, well over 2000 homes and more than 100 businesses throughout Luzerne County were damaged.

In West Pittston alone, 880 of the 2,381 residential structures received damage, including 230 that had flooding on the first floor and about 20 where water reached the second floor.  Fifty buildings had structural damage and a number of those have been or will be demolished as a result of the flood.  Many were not considered to be in the flood zone and were not insured for the damage.

Over 1,500 of the homes in West Pittston are more than 70 years old, and many of these larger, older residences have been subdivided into apartments, resulting in multiple families being left homeless by flood damage to one building.  In many cases, these tenants did not have insurance on their belongings.  And because more than two dozen businesses were also flooded, some residents lost not only their homes but their income as well.  Restaurants, gas stations and medical offices were all flooded, some severely, and it will take many of them months to rebuild.

As West Pittston started to dig out, those who would often be on the scene to help were also struggling.  The local National Guard armory and the Salvation Army were in the worst hit areas, and while both did respond to the disaster, their efforts were hampered by their own devastation.   Several churches were flooded, the local library suffered extensive damage, and the elementary school suffered damage to a number of lower level classrooms and the gymnasium.  Trinity Episcopal Church and rectory were spared, but many of its neighbors and a number of parishioners were directly affected by the flooding.

Similar situations exist in neighboring towns, including the Jenkins Township section of Plains and an area of Exeter Township known as Harding, where a combined total of about 150 structures were damaged, many of them in trailer parks and lower income areas; and Duryea, where 340 homes and businesses as well as the Roman Catholic elementary school were affected by up to seven feet of water on the first floor.  Duryea Borough officials estimated property owners in the small town of about 4,600 residents have sustained more than $7 million in damage. 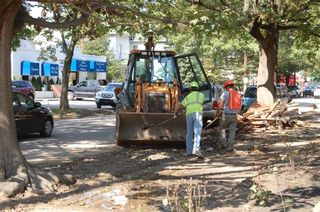 As a result of hauling away mud soaked debris ranging from furniture and clothing to ruined carpets and drywall, Duryea officials expect the town’s landfill bill to soar from the usual monthly fee of $1,500 to more than $70,000, and this in a town where the entire 2011 budget is $1,202,603.  Since all of these hard-hit areas are small towns with very limited resources, each community faces similar situations, and they are relying heavily on outside agencies and organizations for assistance.

This assistance has been forthcoming in the form of some government emergency relief funding as well as practical help with everyday needs such as meals, flood clean up kits, medical care and clothing provided by local churches and civic organizations.  Some businesses are also stepping up to help with discounts on furniture and other necessities; a few are even making free items available to those who suffered flood damage and loss.  All of this helps with the immediate needs of those affected by the September flooding, but so much more remains to be done.

Most of those whose homes were flooded remain displaced, waiting for contractors to become available or unable to afford the work needed to fix their homes.  Even as they try to prepare to rebuild their lives, they find themselves battling mold and other potentially toxic contaminants.  Some renters are struggling to come up with deposits for new apartments and, in some cases, the funds to refurnish an apartment when they find one.  Others whose homes were not flooded are housing neighbors or family members, straining financial resources to feed and support those affected by the flood.  The aftermath of this flood will continue to impact the people of these small towns for a very long time, far longer than most outside agencies and organizations will remain on the scene.  In an area already facing an unemployment rate that has inched back up to 10 percent—higher than both the state and national rates -- recovery could take months, if not years. 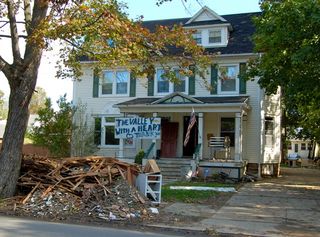 Trinity West Pittston and the other Episcopal Churches of Luzerne County have pledged to be there as long as our neighbors need us.  Even before the river receded, parishioners in the Luzerne County churches were helping each other and our neighbors meet urgent needs for housing, food and volunteer labor.  We are currently in the process of speaking to flood victims to determine what needs aren’t being met by others or what needs may arise in the future, and will then work together within and between congregations to meet those needs.  For example, some services under consideration include counseling for those affected and childcare to allow parents uninterrupted time to work on their homes.  And since the increased need of residents displaced and/or unemployed because of the flood has left local food pantries with bare shelves, the area’s Episcopal Churches are stepping up efforts to restock those shelves.

Some cooperative flood recovery projects between congregations are already underway as well.  For example, through the efforts of The Rev. Daniel Gunn, Rector at St. Stephen’s Pro-Cathedral in Wilkes-Barre, a local hotel undergoing renovations has donated rooms full of furniture, and a team organized by The Rev. John Major, Rector at Trinity West Pittston, will seek donations of other household goods like bedding, towels, dishes, etc., and coordinate a distribution to local flood victims.  However, even using donated items and volunteer labor, efforts like this will require funds for warehouse space and trucks to transport and store the items.  Local congregations are already contributing time, talent and treasure to flood recovery efforts and seek help to let our neighbors know the Episcopal Church is there for them.

No matter how worse the situation we have right now, bear in our mind the obligations we have to help our fellows who need great help like them. It is truly a heart warming to see those people who are busy enough doing things to support the victims. Let us all join our hands together to combat against the power of calamities.

As I explore in the world of net. I always been encountered blog topics about floods. It made me realize on how flooding is being rampant anywhere in the world. Who was to blame for this? not God I'm sure but maybe the people alone who are selfish enough for the needs of their existence.