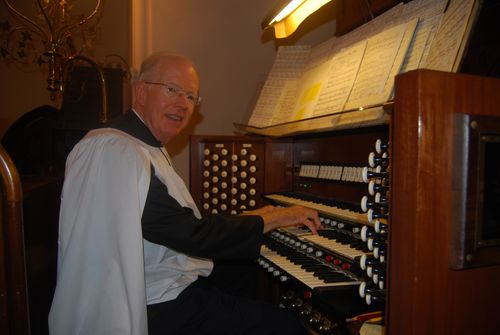 The service was filled with beautiful hymns, which included Glorious things of thee are spoken, Austria, and Guide me, O thou great Jehovah, Cwm Rhondda, one of the first Bruce had ever played, and an anthem based on Psalm 150 by Cesar Franck. The service began with a congregational favorite prelude played by Bruce, Prelude on Brother James` Air by Searle Wright, who was one of Bruce Bengtson’s professors at Union, and ended with a postlude favorite of the congregation played by Bruce, as only he could do, the Toccata from Organ Symphony V. Father Francis’ sermon reviewed the incredible blessing Bruce’s extensive and very generous ministry has been for Christ Church and for him personally and how much he will be missed. Bruce and Ruth Anne are looking forward to a well-earned and very enjoyable retirement together.

Following the service, the parish put on a delicious hors d’oeuvre reception in the parish hall for the entire congregation. Then, parish members and friends of Bruce and Ruth Anne attended a lavish by invitation luncheon at the Abraham Lincoln Hotel in Reading. Speakers included James Wilson, the newly appointed organist and choirmaster of Christ Church, choir member and soprano soloist extraordinaire Runette Gabrielle, Bishop Jack, a colleague and fellow class member of Bruce and Ruth Anne at Union Theological Seminary, where the Bengtson’s first met, Dr. Francis Williamson, who taught at Albright College, and the Bengtson’s children Matt Bengtson and Sallie Mercer. Ruth Anne had put together a wonderful photographic presentation of Bruce’s career, which was presented on power point. The Christ Church Choir, led by Jim Wilson, offered a joyful rendition of, “We are the very Model of Today’s Episcopalian.”