Missioner for Youth Kimberly Rowles
Centering Prayer.How do you talk about silence? 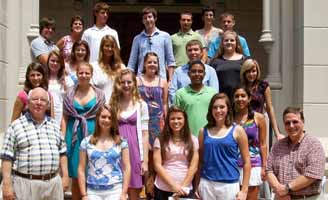 “This trip was a truly amazing experience for me,” a youth participant said. “I can’t believe how ill informed I was about the state of New Orleans; it truly caught me off guard. I enjoyed every day and didn’t even mind waking up early! The multitude of good times definitely outweighed the minimal bad ones.”

Our encore performance as missioners in the Diocese of Louisiana ran from July 25 through August 1. In roughly 80-90% humidity and heat, 25 missioners from the Diocese of Bethlehem sheet-rocked, machete-d and painted their way around the Gentilly area of New Orleans. Twenty youth from ten congregations from all over the Diocese put their sweat and tears into the Louisiana homes, churches and community meeting spaces where we did the work of Christ. 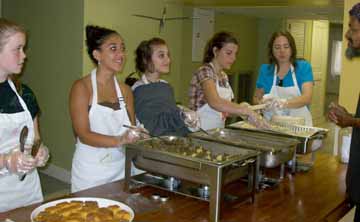 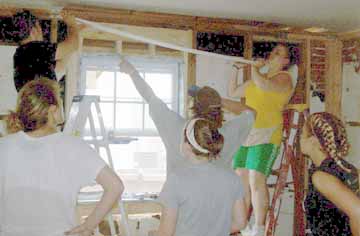 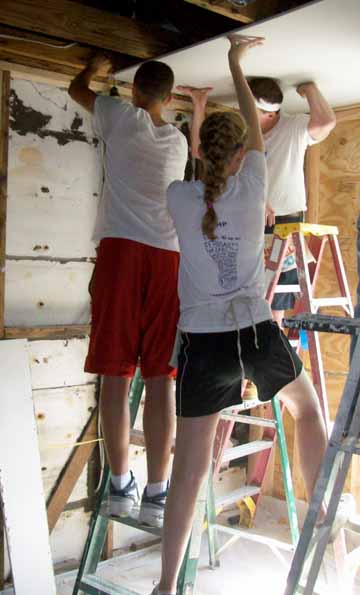 Our crew chief from Episcopal Community Services (formerly the Diocese of Louisiana’s Office of Disaster Response) Mary Bess, and her sister, Grace, worked with our mission team to sheet rock the ceilings in a family home which was under eight feet of water after Katrina. The family has faced a number of setbacks including a battle with cancer and the death of the husband and father in Arkansas after the storm, leaving them without money or credit to rebuild.

We worked from the wee morning hours until the mid afternoon, Monday through Thursday. Learning compassion, teamwork and how to use a screw gun, all the while doing what ever Mary Bess asked of us, even tearing down two rooms of sheet rock and starting over on our last day of work.

We did have the opportunity to spend some time around the French Market and French Quarter. We resided for the week in the Garden District off of the famed St. Charles Street (where a number of the Mardi Gras parade routes tramp), there are still beads hanging from limbs and wrought iron work along the route. Some of the highlights from the trip included experiencing community at St. Anna’s, serving the homeless and other volunteers at St. George’s Dragon Café, and spending time with friends from the Diocese who we may not get to see as often as we may wish.

There were a few low points as well. We had some transportation snafus including waiting for nearly 2 hours to get our vans and SUVs from the rental company, Father Cal’s car getting a flat tire, Marirose’s trip to the emergency room and concussion after realizing that the van was in fact not a convertible, and getting lost while going to view the destruction and reconstruction of the lower ninth ward. Much to our relief, there were more uplifting than depressing moments, including Bobby and Corey’s antics, Father Cal’s constant assertion that “This is all part of the adventure,” the excellent sermons at Christ Church Cathedral on Sunday, and St. Anna’s mid-week Eucharist and Healing Service. It was obvious that we were doing good work, but there is still so much to be done.

There have been strides taken in the two years since our last mission trip to New Orleans. The streetcars have resumed service, there are more people coming back to certain neighborhoods, and the tourists have come back for their traditional New Orleans experiences. But there are still more homes to be rebuilt. In Gentilly where we were working, over 75% of the properties are not being lived in or are not capable of being lived in. Charity Hospital, the largest public hospital in the city, remains closed. The schools are over crowded, under funded, and understaffed. The city is teaming with violence and crime, testifying to this problem is the “Murder board” outside of St. Anna’s which when we were here had over 140 names listed for this year alone. With so much need in New Orleans, it is hard to believe it is a major shipping port in the United States.

As we walked down the streets, or ate in restaurants, worshiped in churches, or watched Imax movies, we were reminded of the human community of which we are innately involved in a way that I am not sure that I completely understand. Wherever we were, regardless of what we were doing, people would ask where we were from, and thank us for the work that we are doing, and they would request that we remember them, and that we come back and help some more.

Since coming home, I have thought about what it means for me to remember the people of New Orleans. When reflecting on this time together, the phrase “do this in remembrance of me” bounces around in my skull. In remembering one another’s struggles, passions, skills and shortcomings we become a stronger community, we become more like the world that God created and the people for whom Christ died. In doing the work that needs to be done and in sharing our experiences with those who can and will do more to improve the lives of New Orleans’ residents, these missioners have remembered that we do not have to rebuild alone, nor do we have to rebuild over night, but we do need to work together to bring light to New Orleans, and we can’t let the light of memory die out.

There is still so much to do.

As much as we love the folks at Trinity, Bethlehem, we must proudly claim Jensen Appleman as our very own. She is a member of Trinity in Easton!