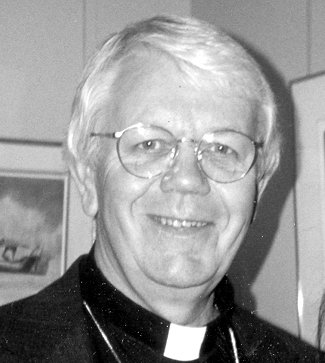 A native of Morrisville, he majored in history at Franklin & Marshall College and went on to earn his M.Div. in Theology from Philadelphia Divinity School. He was ordained to the diaconate in the Episcopal Church in 1962 in Morrisville, Pennsylvania, and then to the priesthood in December of that year in Fairbanks, Alaska, where he served as Curate of St. Matthew’s Church.  He was appointed priest in charge of St. Philip’s, Wrangell, Alaska, where he served for over 25 years.  Alaska allowed Ned to pursue his love of the outdoors, spending many hours hunting and fishing and sharing his love of nature with his family. During that time he also taught high school and earned a second master’s degree in Reading Education from Southern Oregon State University.

He moved back to Pennsylvania in 1990 and served as rector of Trinity Episcopal Church in Athens until his retirement in 2006.  He continued as Assistant Rector until the time of his death.

He is survived by his mother, Doris; his sister, Janet Caum Brandt; three children from his first marriage to the late Marilyn Laird, Virginia Caum Lake and her husband Greg, Edward Leonard Caum and his wife Susannah, David Laird Caum and his wife Erica and their families; and his wife of 30 years, Barbara Cameron Caum of Athens, their son, Alan, her daughter, Jessica, and her family as well as countless others who loved  him.

There will be no viewing hours.  A Eucharist in celebration of his life will be held at 4:30 p.m. on Wednesday, June 3rd, at Trinity Episcopal Church, 703 South Main Street, Athens, Pennsylvania.  Memorials in his honor may be directed to Trinity, and mailed to the church office at 701 S. Main Street, Athens, PA 18810.

I miss you dad. I find strength in all you taught me. I hear your voice in many things I say, in difficult times as well as happy times. May you live long in the hearts and thoughts of others and I pray your words and actions serve as guidance to others as they did for me and my family.

May you each find comfort in knowing your father touched many hearts in his caring and gentle manner. We in Wrangell are grateful for the time he was able to spend with us.

Know that I am holding all of you in my thoughts and prayers. Fr. Caum instilled in me a sense of kindness and justice and this legacy will be carried forward.

Dearest Ginny, and boys,
My deepest sympathies to you, & yours. I have the most loving thoughts of your father, our Father Caum! I will ALWAYS hold him dear in my heart, not only from our St. Phillips, but as one of our best high school teachers. Such an amazing man, he gave sooo much ! With Love & Affection, Diane Marie Comer

My thought and prayers are with your and your family. I will miss you this year!

My heart goes out to you, Ginny, and your family. May you find comfort in knowing that you are in my thoughts and prayers!
With Love, Cindy Lewis