Imagine yourself in the Episcopal Church

Three 30-second television spots have been giving northeastern and central Pennsylvania viewers of WNEP, channel 16, visual clues of the Episcopal Church as sacramental and of its members as diverse, involved and caring for neighbors in need.

The spots for this groundbreaking project began to air on April 1 during the Good Morning America show and the 5:30 and 11:00 p.m. newscasts, introduced by WNEP’s Good Things are Happening music.

A tagline on two of the spots asks viewers to “imagine yourself in the Episcopal Church.” That continues with slight variations of “where your questions are respected as much as anyone’s answers,” All three spots – a fourth still to be developed – then conclude on the note that viewers can find an Episcopal church or more information about the Episcopal Church by visiting the WNEP website.

They will air more frequently during the Easter season, less during the summer, and more during back-to-school time and before Christmas. They may be seen locally and around the world also on YouTube and Facebook.

A resolution on marketing the Episcopal Church in Northeast PA at last October’s Diocesan Convention introduced the idea for the ad campaign to the Diocesan Community and sought support from parishes in the WNEP coverage area, 42 of our 65 churches.

The resolution read: "This Convention applauds the efforts made by parishes to evangelize their communities using local media outlets. Furthermore, we encourage those efforts by calling upon the parishes in the northern and central parts of the diocese to participate for one year in a televised evangelism campaign by contributing to the cost of a commercial advertising program to run under the title, The Episcopal Churches of Northeast Pennsylvania, on a local television station.”

Background supplied at the time noted that “WNEP, an ABC affiliate out of Scranton, reaches almost all of the parishes in the northern and central part of the diocese. It also reaches as far south as Allentown and Bethlehem, but for market reasons it does not include that area. (That region belongs to the Philadelphia market.) During WNEP’s daily newscasts the station reaches 82% of adults age 25-54 in the central and northern portion of the Diocese of Bethlehem. A yearlong television advertising campaign would be cost prohibitive for any single parish, but if we each contributed $1,000 to $1,500 we could participate in a campaign to promote the Episcopal Church in Northeast Pennsylvania. Churches which cannot contribute that amount are asked to pledge an amount more attainable, because we anticipate that every parish will benefit from this cooperative venture. No single congregation will be highlighted during this campaign. It is also worth noting that no other denomination is advertising locally on any station. This is a one-year experiment.”

This is “a wonderful and ambitious project that the Evangelism Commission enthusiastically supports and, best of all, is not running,” said Canon Andrew Gerns, rector of Trinity Easton and chair of the Commission.

Noting that the Commission has committed $3,500 to the project over 2008 and 2009, he said it is “not too late to contribute to this major evangelism project.”

The hard work of creating and implementing the project was done by Gunn, Cesaretti and Major along with some resourcing and consultation with Jennifer Martin, administrative assistant at Prince of Peace Dallas, and Bill Lewellis, diocesan communication minister.

Episcopal Church members did the voice-over on two of the spots.

“This has truly been a collaborative and cooperative effort by clergy and laity from all over the diocese,” said Gunn. “I am proud of what we have accomplished and of how much support we have received from the parishes.”

The voice-over for the mission and outreach spot was done by Reilly Shinger, a St. Paul's Church School scholar and second grader at Elk Lake.

Reilly is eight years old, and a voracious reader. "She reads everything from the Magic Treehouse series to Harry Potter," reports her father, Mike.

Reilly does Jazz and ballet, dancing on weekends, and has already competed in two horse shows, winning ribbons in all events in which she has participated.

She loves watching anything on Animal Planet (even the gory stuff), and really would like to be a veterinarian or horse trainer in her adult life. She also likes learning how to cook, spending time with her little sister Delaney, and making crafts with her mom, Heather.

I baptize you in the name of the Father, and the Son and the Holy Spirit … He took bread, blessed it and said, “Take, Eat.”  … With this ring, I thee wed … Do you believe that you are truly called by God and his church to this priesthood? Imagine yourself in the Episcopal Church ,,, where your questions are respected as much as anyone’s answers. To find a parish near you, visit wnep.com, and click on Good Things are Happening.

Church is people. In my community, I am melody, greenery, noble waterer, attending to detail, extending a hand, clasping sorrow and despair, revealing the goodness of those I embrace. Imagine yourself in the Episcopal Church … where questions are as important as answers. For more information about the Episcopal Church, go to wnep.com, and click on Good Things are Happening.

The Episcopal Church in mission and outreach
[Good News Music]
A child’s voice over appropriate stills:

I was hungry and you fed me … I was thirsty and you gave me a drink .. I was homeless and you gave me a room. I was shivering and you gave me clothes. I was sick and you stopped to visit … I’m telling the solemn truth: whenever you did one of these things to someone, that was me – you did it to me. For more information about the Episcopal Church, go to wnep.com, and click on Good Things are Happening. 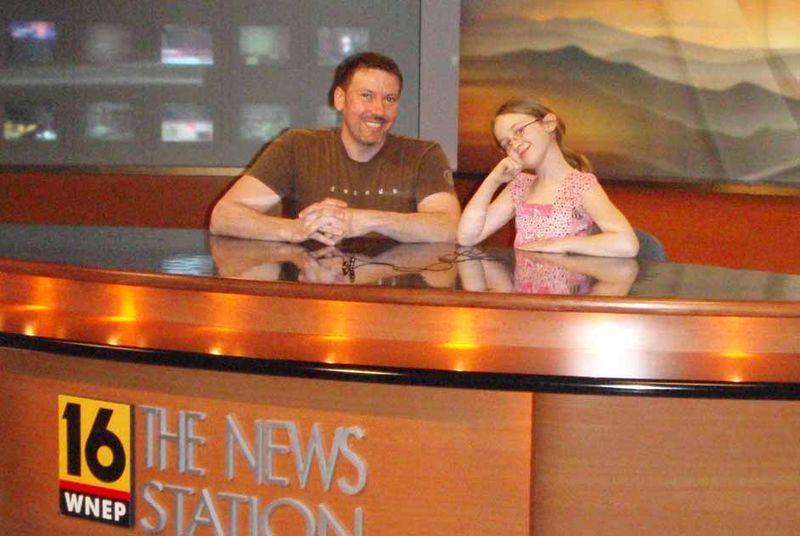 Reilly Shinger ‘tests’ out the news desk at WNEP with dad, Mike. Reilly taped the voice over on one of the new TV ads for the Episcopal Church, which run daily on WNEP.