Minister leads effort to create hats for cancer patients -- both near and far
By Veronica Torrejón |Of The Morning Call
March 21, 2009
The Morning Call, Inc., Cpyright 03/21/09

With her knitting needles deftly working over a ball of gray alpaca yarn, the Rev. Laura Howell was thinking, and not just about the cancer patient who would don her downy cap miles away in Colorado. 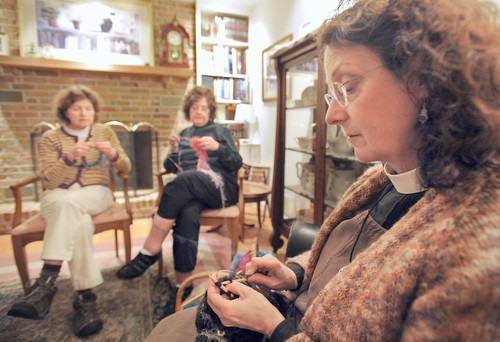 Howell also had her former co-workers at Lehigh Valley Hospice in mind. As a hospice chaplain, she knew the joy it brought staff to present a sick patient with any token of comfort, even something as simple as a hand-knit cap to warm a head left bald and exposed by radiation.

''To give the staff something that makes people happy makes their job easier,'' she said.

Howell also knows the burden and rewards of caring for someone with cancer; she's experienced it as both a chaplain and the daughter of a cancer survivor. Her mother's battle with lymphoma in Colorado inspired her ''chemo cap'' ministry here in the Lehigh Valley, where Howell is the rector at Bethlehem's Trinity Episcopal Church.

Over the last three years she has collected and delivered hundreds of hand-knit caps, crafted by more than a dozen women, to cancer patients in Colorado.


Howell's fuzzy and often colorful caps -- made mostly of eyelash yarn, known as ''Fun Fur,''-- have become so popular in the oncology department at Exempla Lutheran Medical Center in Wheat Ridge, Colo., that the local American Cancer Society has requested the pattern, said Howell.

Ronalda Goodner, with cancer services at Exempla, recently thanked the group and asked for more caps.

''These caps are a SMASH here,'' she said in a letter to Howell. ''Most patients are really, really sick on our unit and to see them smile because their bald head is no longer the beacon as they feel it is. In short, the caps give our patients confidence.''

The concept of caps for cancer patients spans the country and is well-established here in the Lehigh Valley as well. Another group of knitters, inspired by Heather Spoll of Palmer Township who died of cancer in 2000, has a Web site: http://www.chemocaps.com that has also collected caps for almost a decade.

The idea is for cancer patients to feel the love and care that, in the case of patients at Exempla Lutheran, extends halfway across the country.

''That's what the church is all about,'' Howell said. ''It doesn't matter if we are here or there. We are one human community.''

Last year, Howell got an unexpected delivery, a box of caps from Episcopal Appalachian Ministries in West Virginia.

Howell also has knit caps donated by women throughout the diocese in Bethlehem. Some women knit together and others work alone. Howell plans to start regular sessions sometime next month at The Knitters Edge Yarn Shop in Bethlehem on Thursdays.

Howell's crafting group from Trinity Episcopal already knits caps together once a month as they did on Thursday at Gabriele Whittier's Bethlehem Township home.

The evening started with dinner and spilled into Whittier's living room where baskets of brightly colored yarn slowly took the shape of caps under the watchful gaze of a curious white kitten and a meddlesome orange tabby named Arthur Isaiah.

Howell and two other women from Trinity Episcopal joked and chatted while they worked. The women marveled at how the soft, spiky texture of the eyelash yarn almost gives it the look and feel of real hair.

''If you have green hair of course,'' joked knitter Loraine Johnson, who was working on a greenish-blue cap.

''Well, some people do these days,'' replied Howell, as the women all laughed.

For more information about Howell's group contact her at laura@trinitybeth.org.

Posted at 09:53 AM in Crafts, Ministry, Newspapers, Parishes | Permalink | Comments (0)