It's tempting to imagine providence at work in the renovation of Grace Episcopal Church, an Allentown landmark where congregants with an evergreen passion for the Gospel had grown ever less enamored of the vinyl floor, immovable pews and faded 1960s decor.

Even the rector described the look of the place as ''basement rumpus-roomy,'' but transformation -- new floors, new seats, a coat of paint -- seemed out of reach.

The 19th century church at Fifth and Linden has only 80 members and not much money. And virtually all its resources, financial and human, are funneled into its fundamental mission of outreach to the city's dispossessed.

But a few strokes of good fortune and an outpouring of volunteerism let the people of Grace reshape the church for far less than anyone dared to hope. And that has given a renewed sense of energy and purpose to parishioners, who consider the little church an essential part of downtown's past, present and future.

''What this church means to downtown is just as important as the Baum School [of Art] across the street and the art museum on the corner,'' said member Michael Fegley, a major investor in the city's fortunes through his family's Hamilton Street restaurant, the Allentown Brew Works.

''Just as other people are doing facade restorations in the neighborhood, this is our investment in downtown.''

That's not just an insider's view.

''They're incredibly important,'' said Mayor Ed Pawlowski, who frequently champions the value of faith communities to cities. ''They do some amazing work in the community with their after-school program, their homeless initiatives, their food program.Â They're a stabilizing force in the community.''

Grace, founded in 1859, had hundreds of members at its peak. But membership stagnated and dwindled as city dwellers undertook their great migration to the suburbs in the latter decades of the 20th century.

Churches across the denominations closed or moved. Grace remained, though the Rev. Patrick Malloy, rector since 2001, said only about 10 percent of today's members live downtown. Others come from afar, unwilling to surrender their attachment for the sake of convenience.

Addison Bross, a Lehigh University English professor, attended Holy Week services at Grace six years ago at a friend's invitation and was enchanted by the liturgy.

''I like very much the time taken during the service for silence,'' Bross said. ''There is space to let the [scriptural] texts sink into you.''

Andrew Reinholz of Bethlehem, who plans to enter seminary, said he feels a ''oneness'' in the congregation, and admires its devotion to social justice. ''For such a small parish in numbers, the amount of activity going on is astounding,'' he said.

The church's cosmetic transformation began last summer. A grant from a private foundation paid to replace the slate roof, but the workers apparently weakened part of the structure as they walked over it. In July, heavy rains broke through and flooded the liturgical space, damaging the floor.

Renovation turned from wish to necessity, but where to find the money?

That's where providence seemed to enter the story. At a summertime memorial service, Brian Brinker of Coplay, grandson-in-law of a longtime member, saw the flood damage and offered to donate $26,000 in terrazzo flooring material if the church would pay for labor.

The labor turned out to be covered by the insurance settlement from the flood damage, with $6,000 left over. That money paid for a new lectionary (a book of readings) and projector, plus paint and other supplies.

Volunteers took it from there. Beginning the day after Thanksgiving, they removed the pews, carpet and vinyl tile and installed the plywood subflooring for the terrazzo. Cathy Reid, who founded the church's Montessori school, said she and other volunteers drove 5,000 screws into plywood over the course of four days.

Workers then mixed and poured the terrazzo and ground it smooth.

By Christmas Eve, Grace Church was ready to welcome the faithful again. But one element of the renovation remains to be finished. The metal-and-plastic chairs that replaced the pews will be replaced by Gothic-style oak chairs that match the deep brown of the ceiling.

There, providence struck again. A benefactor on the West Coast -- a woman who has never been to Grace but happened to visit Grace's Web site and read its renovation wish list -- offered to donate $10,000 for chairs if the congregation could raise the same amount. It did.

Members were conscious the public might look askance at a church in a poor neighborhood spending money on alterations, but the work is far more than cosmetic.

Without the pews, for example, the church is a far more useful space. Malloy foresees concerts and workshops. It has already been used as a shelter for the homeless during recent cold days. Reid plans an arts workshop in March.

The liturgy benefits from the change, said Libby House, the church's senior warden and school executive director. For much of its history, Grace was arranged like most other churches, with pews set to direct the gaze of the faithful forward toward the altar in front.

Now the chairs can be moved to let the worshipers see one another's faces. ''Looking at the backs of people's heads did not affirm how we see God in our lives,'' House said.

The Rev. Clayton Morris, the national liturgical officer of the Episcopal Church, said Grace has created ''a beautiful, practical and liturgically useful'' space.

And Jeff Kemmerer, a congregant from Allentown, said the new surroundings provide a spiritual boost. 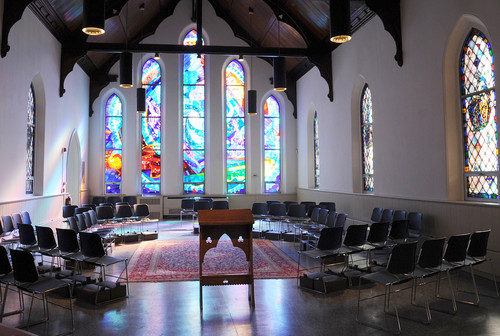 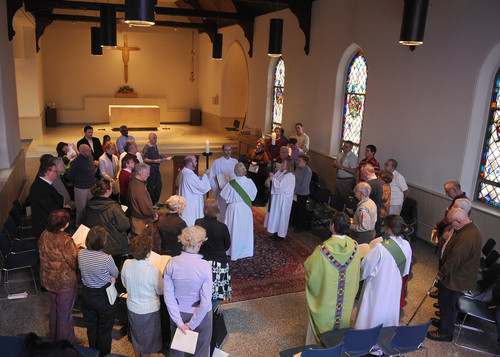 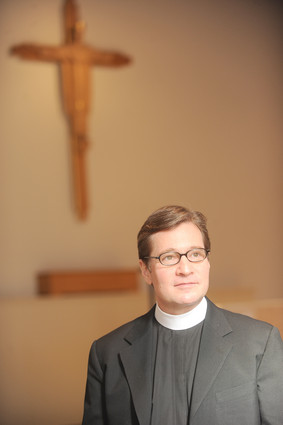 Posted at 08:26 AM in Liturgy/Music, Newspapers, Parishes, Renovation | Permalink | Comments (0)